The manuscript describing the FishResp software has been published in the “Conservation Physiology” journal! This methodological paper is based on two case studies demonstrating functionality and applicability of both the R package and the GUI app. If you use the FishResp software in your research, please cite it as:

We thank the Editor and Anonymous Reviewers of Conservation Physiology for their valuable comments and opportunity to publish our work in such a great journal! We are grateful to all the people who have contributed to the development of this software! We appreciate the financial support of this project from the grant foundations. This work won’t be realised without all of you! 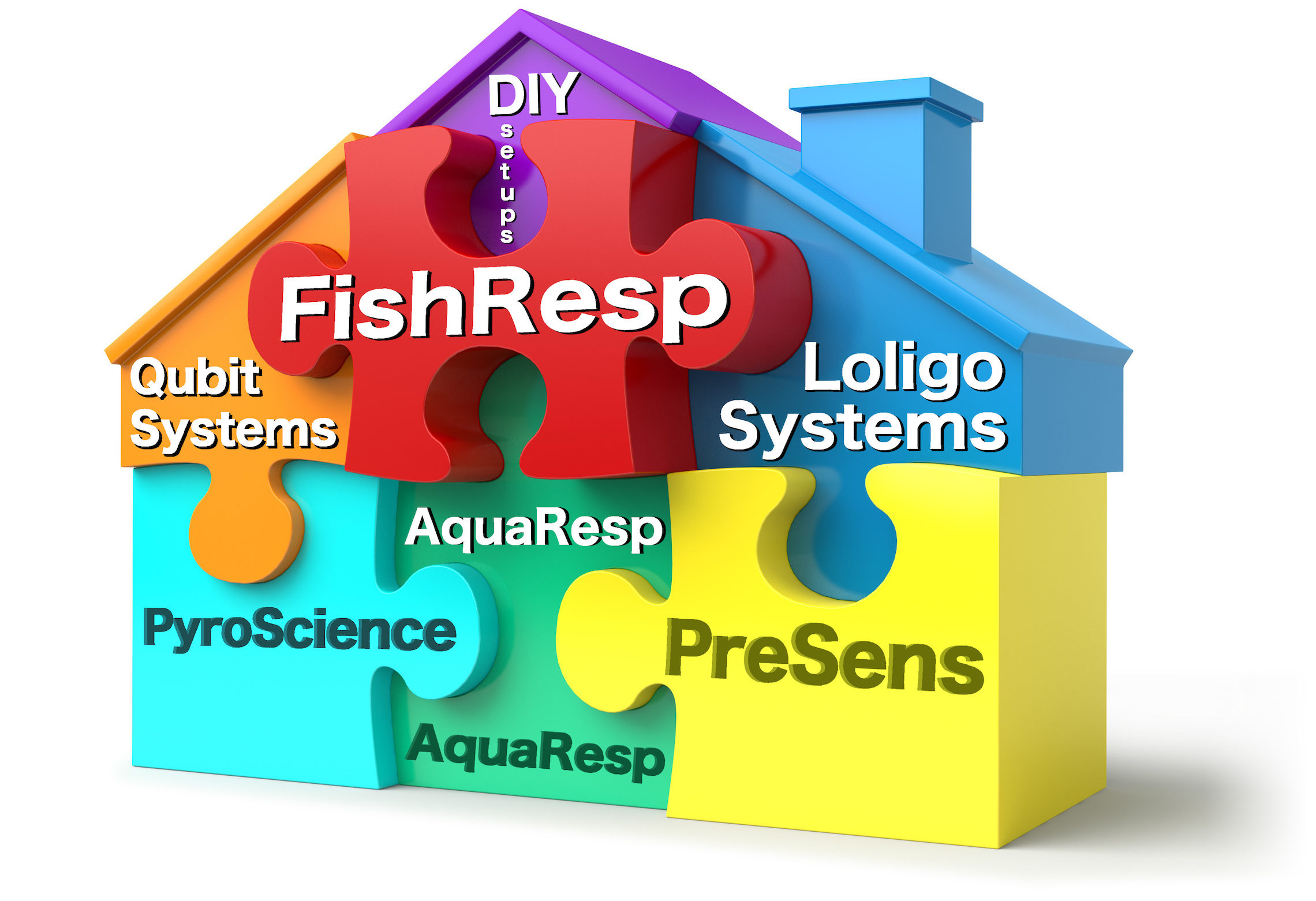 After two years of alpha- and beta-testing, we are glad to announce the official release of FishResp!

We tried to make FishResp suitable for every researcher interested in the analysis of raw respirometry data. Are you a fan of console or a graphical user interface? Do you work with fancy commercial respirometry systems or with your own DIY setup? Do you rely on this or that experimental design/methodological approach?

To suit all your needs, we developed both an R package and a cross-platform GUI application which are integrated with the majority of respirometry systems and have wide range of options for analyses of respirometry data. The preprint describing the software will be available in November 2018.

Integration with the majority of respirometry systems

Now, the software is able to import raw data from various intermittent-flow respirometry systems available in the market. Particularly, the output can be loaded to FishResp from following oxygen logger software: ‘AutoResp‘ (LoligoSystems); ‘Qbox-Aqua‘ (QubitSystems); ‘OxyView‘ (PreSens) and ‘Pyro Oxygen Logger‘ (PyroScience) used in couple with ‘AquaResp‘ (free software). Raw data obtained from DIY respirometry setups should be converted manually to the ‘FishResp’ format first and then can be loaded to FishResp as well.

This update could not be done without data contribution of Daniel Montgomery, Laura Almodovar-Acevedo and Stephen White. Thank for making FishResp better! 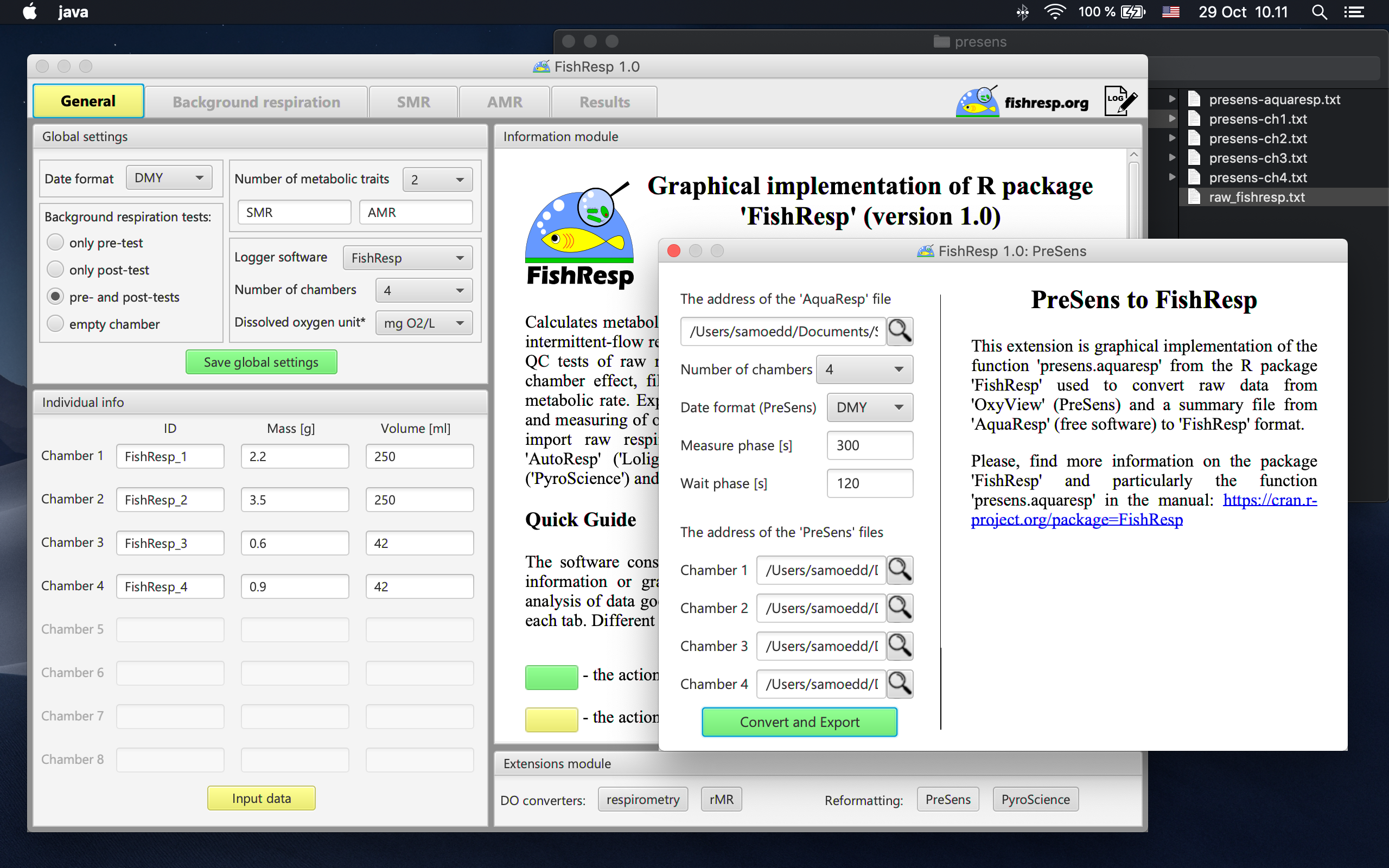 The other important feature of the officially released version is implementation of diagnostic plots for linear regression analysis. Three types of diagnostic plots are available for both current and alternative lengths of selected slopes: “Residuals vs Fitted”, “Normal Q-Q”, “Scale-Location”. In addition, a user is able to remove poor-quality measurement phase(s) manually in the GUI application for specific trait and respirometry chamber. 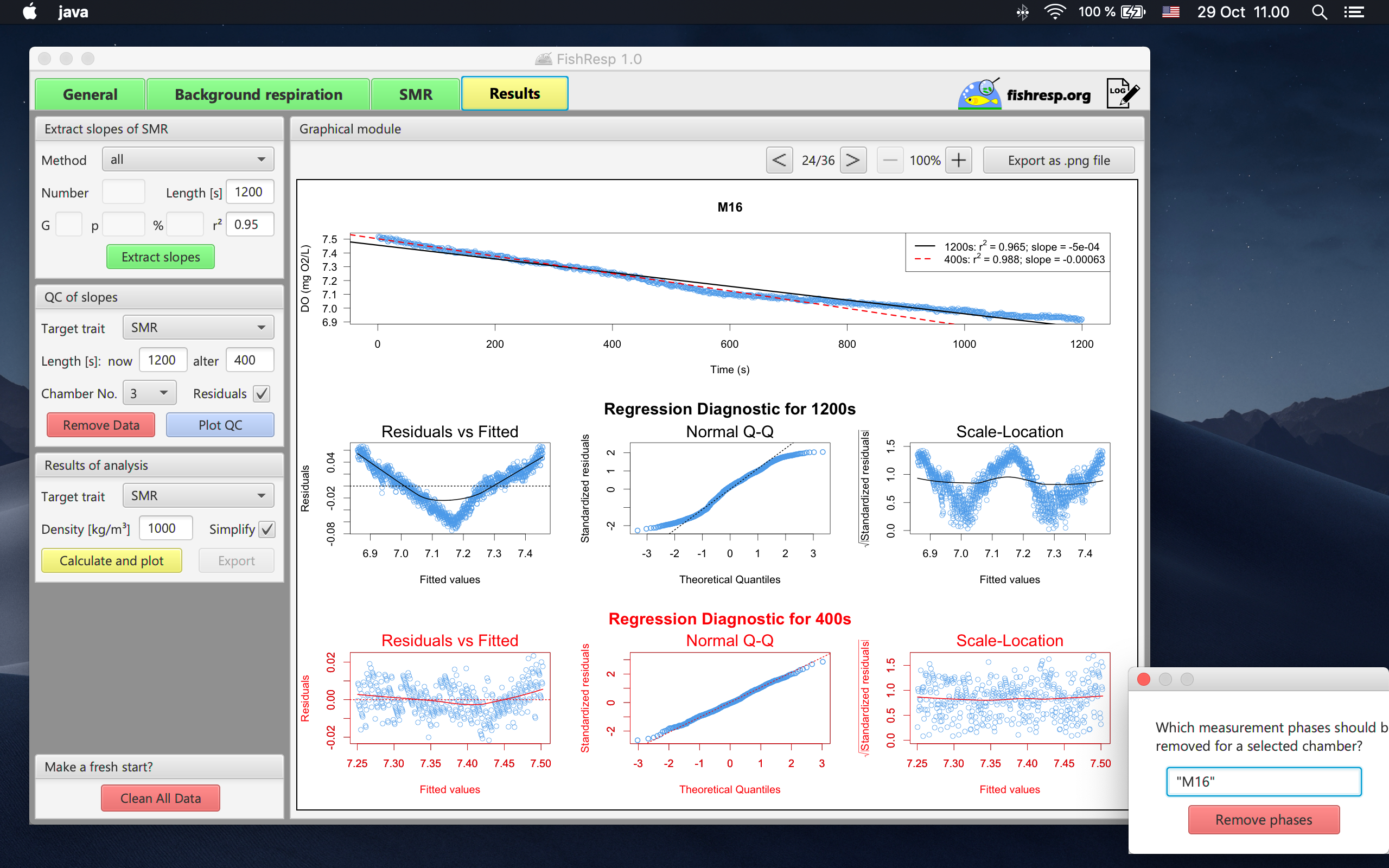 • Optional increase of the wait phase (’W’) is available in the functions import.test and import.meas if the wait phase is absent or not long enough to eliminate non-linear change in DO concentration over time from the measurement phase (’M’) after shutting off water supply from the ambient water source.

• Implementation of diagnostic plots for linear regression analysis was added to the function QC.slope: “Residuals vs Fitted”, “Normal Q-Q”, “Scale-Location” for both current and alternative lengths of selected slopes.

• Improved graphics with new labels on axes and in legends

• The bug with time conversion units is fixed, several minor bugs have been fixed in GUI application

• Updated demo data and documentation of the R package 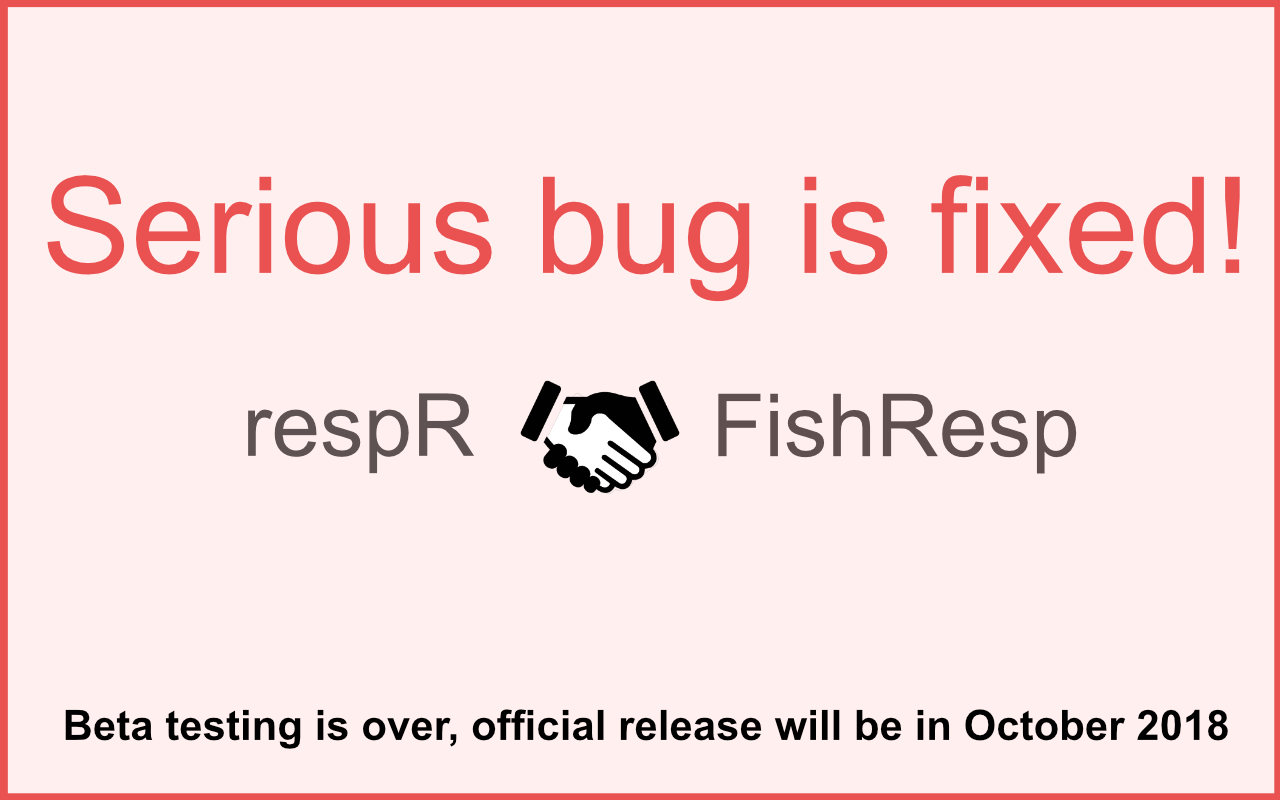 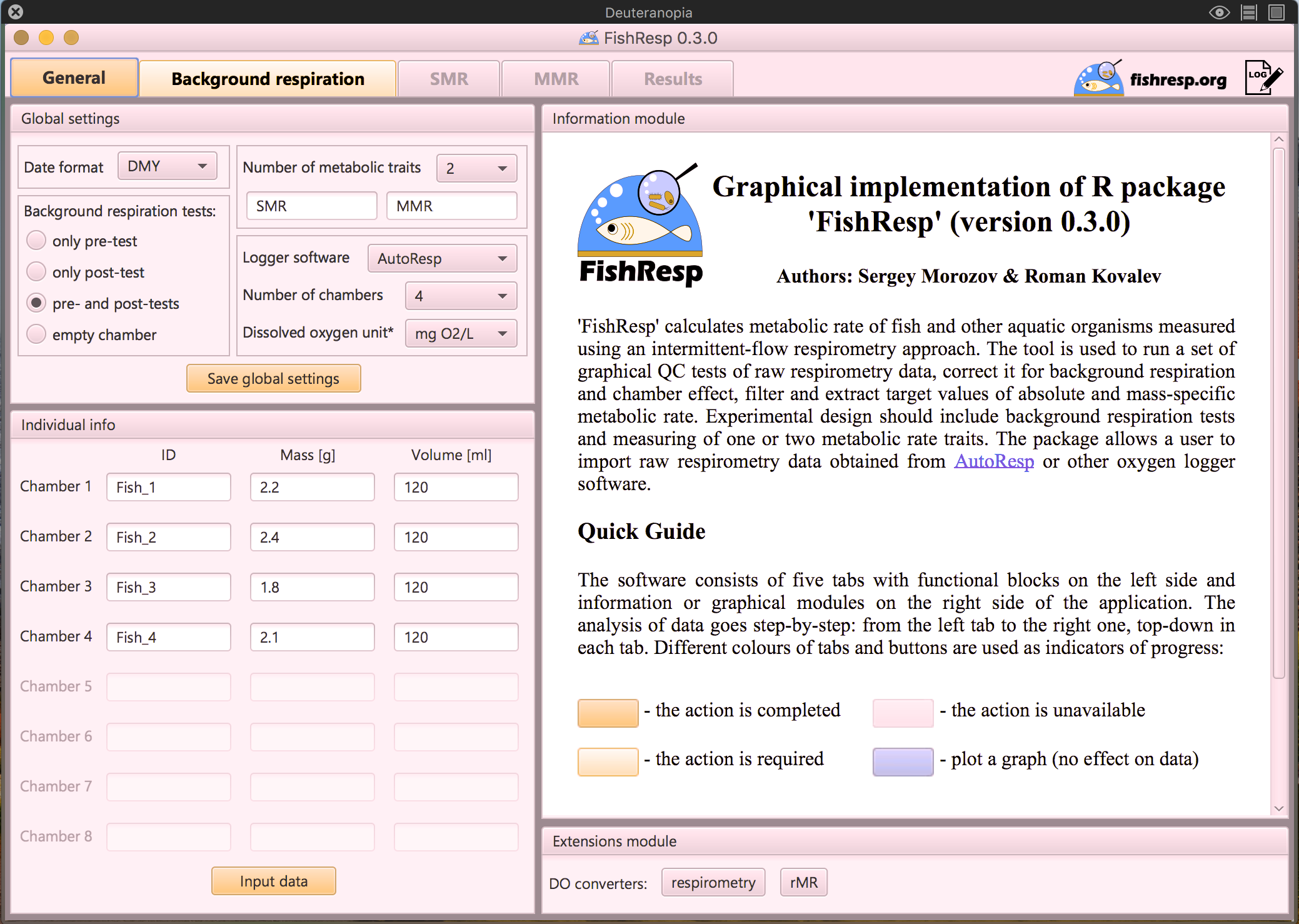 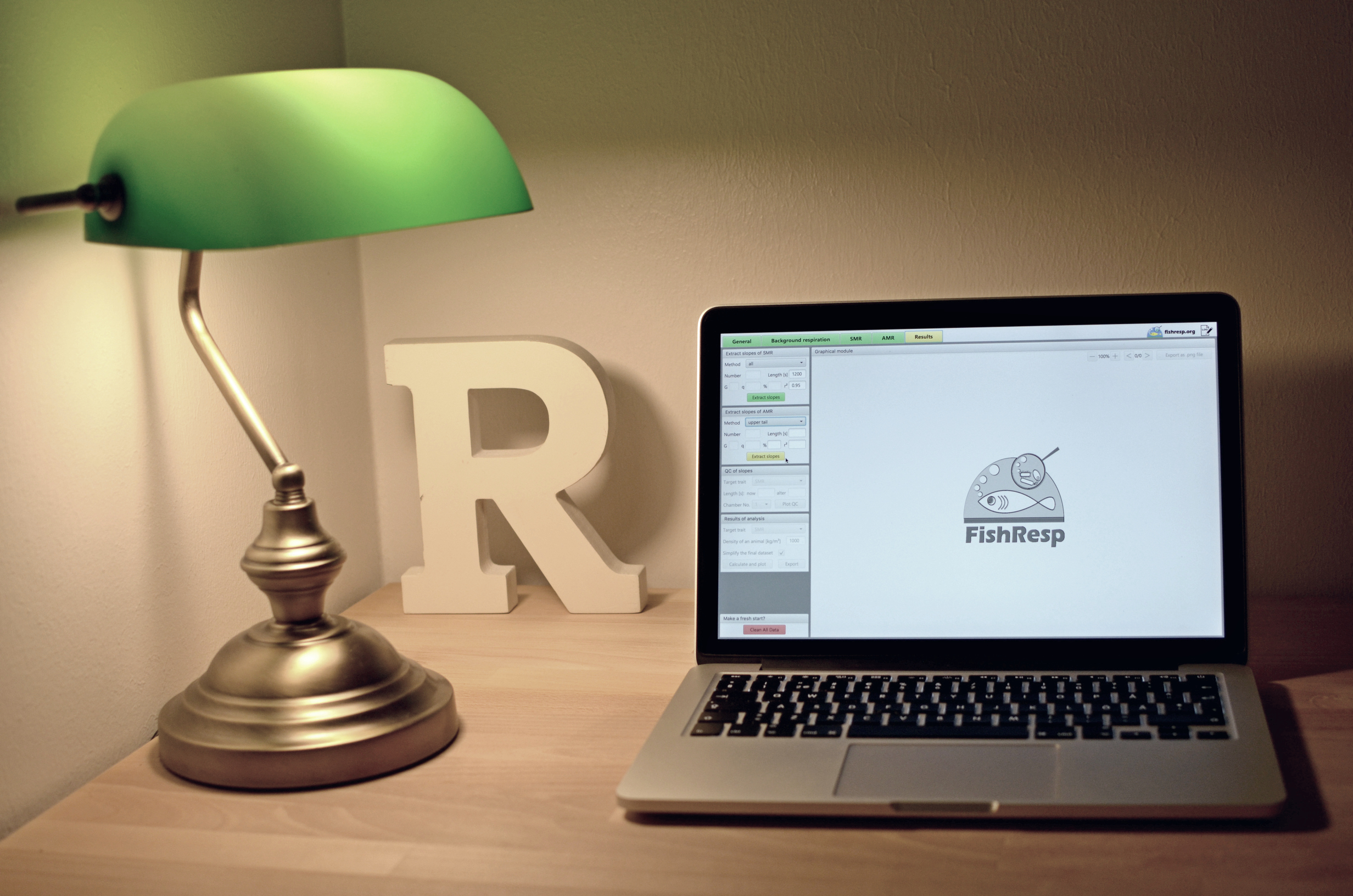 The software represents a graphical implementation of the R package ‘FishResp’. It is a free application with a user-friendly interface available for Windows, Linux and macOS. To know more about the software, please click here.

If you find a bug, please report about it on the forum.
Your feedback is important for us to improve next versions of the GUI software ‘FishResp’.

‘FishResp’ is available on CRAN and GitHub 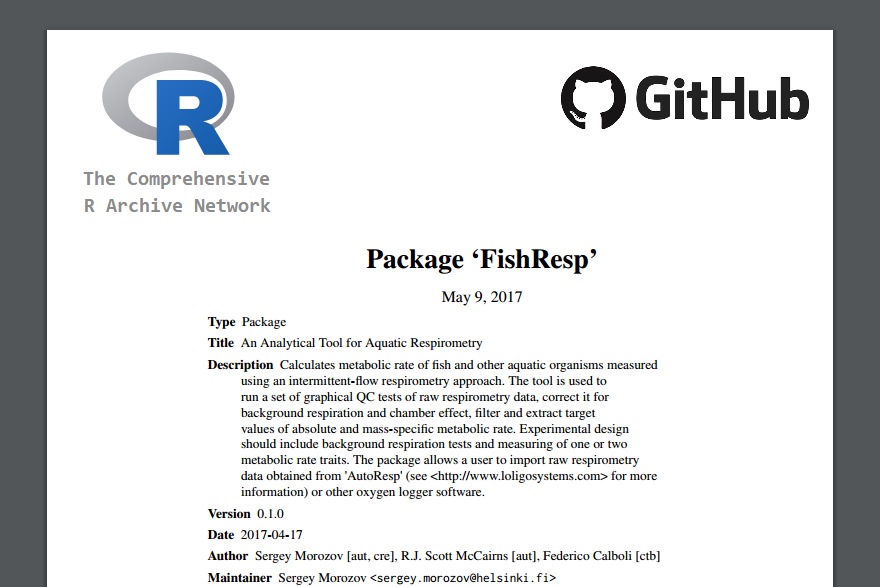 The R package ‘FishResp’ (version 0.1.0) is available on CRAN and GitHub! 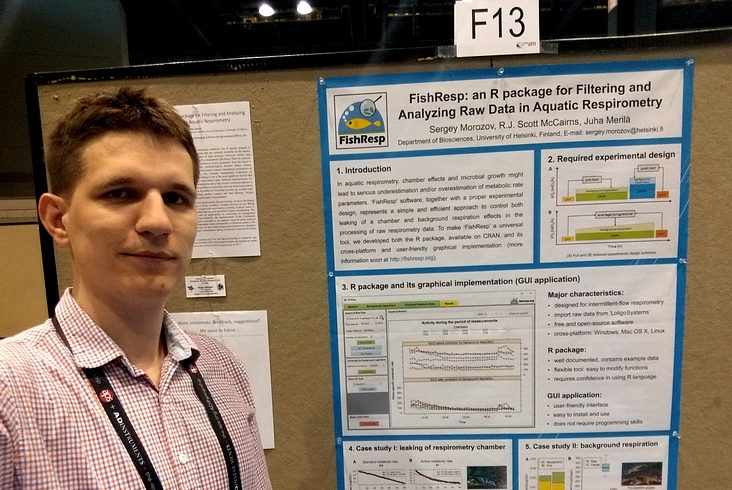 The R package ‘FishResp’ and its graphical implementation will be presented today (23.04.2017) at the conference “Experimental Biology 2017” in Chicago.

Title of the abstract: “FishResp: an R package for Filtering and Analyzing Raw Data in Aquatic Respirometry“.

The first public presentation of ‘FishResp’

Spiring Symposium 2017 – we got a 2nd runner-up award for the project!